Did you miss this inspirational talk?

Recorded live on February 26th with Melanie Wahlberg, C.S.
from her home in Southern California for
Christian Science Society, Charleston, IL.
Watch it below…

NEVER ALONE:  How spiritual ideas work in us

When we feel stuck, we naturally want answers. It would be reassuring to feel supported instead of alone in our efforts to progress. In this talk, I discuss what I’ve found helpful from my practice of Christian Science healing: a way to experience God as an active presence of good in our lives, and a reliable source of fresh ideas that bring about inspired solutions.

Ideas from God, rooted in the spirituality that makes up our true nature, stir something new in our consciousness. They uplift our outlook — sometimes before we even realize — in ways that change our lives and our health for the better.

During the lecture, I refer to God as divine Love or Mind, rather than as a superhuman figure making arbitrary decisions about our lives. This divine Mind is the infinite, loving source of all good, timeless ideas. God’s thoughts remind us of our spiritual identity, show us our potential, and enable us to heal and to be healed.

But how do we find these healing ideas consistently?  We’ll look at the teachings of Christ Jesus, our best and most practical example. And we’ll delve into Mary Baker Eddy’s book, Science and Health with Key to the Scriptures, as the explanation of Christian Science healing based on Christ Jesus’ life. I’ll give examples of how this healing approach has transformed lives, including a mother and her infant daughter who experienced physical healing. The mother said, “It felt like the ideas themselves did the work.”

This event is sponsored by

Who warmly invite you to their Sunday morning service at 10:30 AM

and Wednesday evenings at 7:30 PM

If you register here, you will receive three email reminders – one week before, one day before, and one hour before this important event.  You will also receive only one email after this talk thanking you for registering and asking if you have any questions.  After that, your email is purged from our system.

OR, if you don’t want to register, just come back here and watch the lecture live (scroll down).

About the Speaker, Melanie Wahlberg, CS

Two influences on me that I’ll never forget were the Christian Science Sunday School and a mom who turned to prayer and encouraged me to do the same.  These influences showed me something of the reliability of God and spiritual inspiration, and trusting this helped me find my way growing up.  Significant healing experiences with relationship and food issues, and violence in the community, were also unforgettable.  From this, I got an idea of the many ways that Christian Science can transform lives. 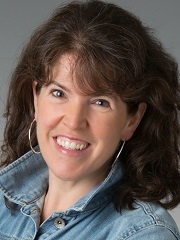 After finishing a doctorate in mathematics, I became a college professor and truly enjoyed teaching.  I found that teaching was less about telling students something than facilitating the students’ discoveries of new concepts.  There was nothing better than witnessing a reluctant student realize that a previously mystifying concept was actually within reach to anyone.

But the higher promise of Christian Science beckoned me to help people redeem and uplift their lives in a fuller way.  When students came to my office for help with calculus, we often found ourselves talking about the joy and excitement of growing spirituality.  After just two years at the college, I resigned from my position and began accepting calls as a Christian Science practitioner. I wrote articles for the Christian Science periodicals, was a frequent guest on Sentinel radio, and began advertising my practice in The Christian Science Journal in 2004. My husband and I also started a family.

These days I love working from my home office in the Los Angeles area.  I like to see lives transformed by the healing ideas of Christian Science, where we ourselves are helped and, at the same time, find we can help others.  My life as a mom has a lot of the same focus.  And whether the spiritual ideas apply to health issues, school, social lives, or sports, my three teenagers push me to “keep it real.”

Have a Question for the lecturer?  Use the form below to submit a question…

What is Christian Science?

Christian Science is an approach to Christianity based on the idea that the divine Truth and Love at the heart of Christ Jesus’ life and works is timeless, universal, and understandable, and so can be experienced through healing in our lives today.